Here we go, into the most personal thing I have ever written anywhere. I generally consider my measurements nobody’s business, but I think this information might be helpful to others who struggle with getting a good bra. Ready?

I have been a little obsessive lately, I’m the first to admit. I can’t stop thinking about boobs. Weird, right?

I had a bra fitting at Macy’s, and bought two new bras in a very different size than I had been wearing. I had gained 15-20ish pounds, so I knew it had to be done. The woman at Macy’s measured my ribcage (about 29 or 30 inches depending on how tight you go) and agreed that 34″ was the right band size, but she added several cup sizes, to my shock. The new size felt immediately better. I stopped being poked and having pain that day. In fact, I wore one of the bras out the door.

I got a Calvin Klein Seductive Comfort bra (image from Macy’s website).

And a Wacoal (Image also from Macy’s).

I do wish that had been the end of the story.

I decided after a week that two bras was really not going to be enough. I had already shelled out $100 for two items, so I was hoping to find something a little less pricey. What I found instead was nothing at all. There was not a bra to be had in my size in that store or in JCPenney’s or in Kohl’s. My friends will snicker now, knowing full well that I am not a busty gal by most standards. How is it that I could not find a bra in a big enough cup size?

To make matters worse, I noted that while at first super comfortable (and certainly better than what I had been wearing), the two bras I bought were actually not so wonderful. They were riding up in the back all day long. I had a different lady remeasure me at Macy’s, and she said I was between at 32″ and 34″ band. Remember, my ribcage is about 29″. While there wasn’t anything more in a 34 band than what I already owned, there was truly not a single item with a 32″ band. Not a single item. What?

Next, I ordered several items from Figleaves.com (cheap shipping, cheap return shipping if needed, and free shipping on exchanges). I ordered several styles from several companies in the size measured at Macy’s. No dice. I did keep one thing that fit marginally well because I could wear it on the tightest band setting (I see now that is a no-no; always buy something that fits on the loosest setting so you can tighten it as it stretches out with wear). And sheesh, I only had TWO bras. I needed it.

I continued to struggle, however. The backs on my bras were riding up, my boobs were not staying put, etc. I’ve been wearing a bra for 30+ years, so I kinda figured I knew how to wear one, but this was ridiculous. I turned to the Interwebs.

I already followed K-Line, a knitter a

nd sewist, who happens to write a lot about bras. So I started reading more, checking out her links, and generally researching boobs, bras, anything I could to have a happier experience.

What I found was that many, many websites including bra makers and high-end department stores, use an outdated method of measuring and fitting women for bras. The formula in the past has included measuring your ribcage and then adding 4″ to that number. Then you would measure your full bust, and figure out your cup size based on the difference between the two measurements. This is, in fact, what the woman at Macy’s did to me. However, when she brought me some things to try on, she immediately said, nope. Wrong. She came back with more things in a different cup, same band size. Clearly, her measurement calculator was wrong.

With my new information, I headed back to the drawing board. This time I ordered several styles from different companies in a 32″ band from Brastop.com (free shipping, free shipping on exchanges, expensive shipping back on returns to the UK). I dutifully ordered up a cup size, based on the suggestion online. If you make the back smaller by one size, you need to make the front bigger by one size. Check.

I enlisted a good friend very nearly my size, and we spent an afternoon trying on bras and helping check straps and bands. I highly recommend the experience. We came out completely empty-handed. The bras felt tight initially, but I could still see the band riding up in the back after wearing for just 5 minutes. We agreed, we didn’t know how we were going to be able to tolerate 30″ bands, but I am going to find out. I am making some exchanges at Brastop in 30″ bands. I also increased several cup sizes.

I have probably spent no less than 40 hours reading about bras and trying bras on. I wish I could just walk into a great lingerie shop and get a true fitting, as apparently is possible in the UK. It’s frustrating ordering online and shipping things back. Through it all, I would say this adding 4″ business is crap. The websites I read said when the method of bra fitting was devised in the 1920’s or so, the ideal woman was considered to have measurements of 36-26-36. However, a lot of women had much smaller ribcages, so they added 4″ to this number to get closer to 36. Apparently, makers were in on this measuring method and made their bras accordingly. However, since that time, materials have improved and are much more elastic, allowing women to wear a much smaller band. I don’t know if explanation is a myth, but I can tell you, the band the Macy’s woman put me is in too big.

1. READ about bra fitting from some of the sites listed below.

4. Try your clothes on over your bra. You need to know how they look while you are dressed. Wear the bra at home for half hour with the tags on, and note any riding up, poking, etc. Most of the time we are sitting, so check out the fit while you sit!

Here are some good sites, if you have more interest in this topic.

*Bra Fitting by MaHeDa. Lots of videos of how to measure, how to fit correctly as well as before & after shots. You can get the subtitles to turn on if they aren’t in English. This one shows exactly how to try on a bra: http://www.youtube.com/watch?v=vM0tPUaooe8&feature=player_embedded.

*Ewa Michalak. This link is for an online shop, but part way down the page is a link to some videos on fitting. Such pretty things on this site too.

*Thin and Curvy. Great information on bra fitting, even if you aren’t thin or curvy.

*Venusian Glow. Much information here about escaping the “Bra Matrix” of ill-fitting bras.

There are several good videos that show what a good fitting bra should look like, especially on websites for bra sellers, such as Bravissimo. Sadly, their size calculators are based on the old-fashioned way of adding 4″, and will probably end up too big in the band. But they have good photos and videos to explain it. This one is good: http://www.bravissimo.com/perfectfit/fitting-video/.

My newest shawl project, if knitted as expected, will be my biggest lace project to date. It is the Bitterroot Shawl by Rosemary Hill. Lovely views of this pattern can also be seen at Knitty.com. I can’t seem to get photos copied over, so just go take a look. It is a free pattern.

I have made many triangle shawls at this point, so I feel like I have a good handle on how they are constructed and designed. I am actually thinking of designing my next project. Getting excited!

In other, completely unrelated news, I have been seriously converted by K-Line regarding bra fittings. There are many good sources for checking out how to measure yourself, what a good-fitting bra should look like, and how your figure can be transformed by the right size bra. Look for more posts on this topic coming soon!

I just can’t seem to get enough lace knitting lately. I finished the Larch, which is waiting its turn to be blocked. I knitted until I had 60 stitches per side, instead of the recommended 96 before starting the lace section. I wanted the lace to start sooner, and I didn’t have as much yarn as I thought I needed to do it exactly as the pattern calls for. I did 2 full repeats of the lace pattern, as required, and I did 8 additional rows, so I think I ended up with…doing math…brain working…114 stitches per triangle half (not counting the 2 edge stitches or the spine). I will add final dimensions after blocking.

The pattern was well written and made it very easy for me to choose when to start the lace and when to stop. I ended up with about 2 extra yards of yarn. Perfect!

I love the sewn bind-off. It was easy and gave a nice finish.

Off I go to find the next orphaned skein.

We had a sunshine-y day this weekend, so I have some photos to share.

First up is the Ginkgo. I am loving this little shawl scarf. I love the color, the pattern, and the soft yarn. 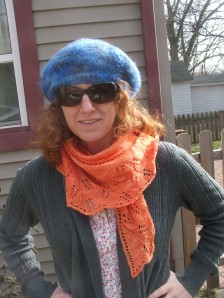 Next is the Not a Drop. I repeat: I love the color, the pattern, and the soft yarn. 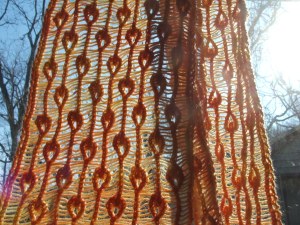 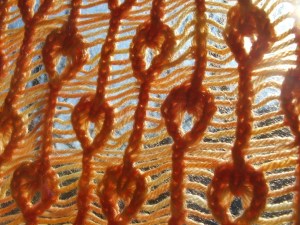 Both are done in Studio June yarn, which I highly recommend. Now I’m working on Larch…

Oh how happy this makes me! 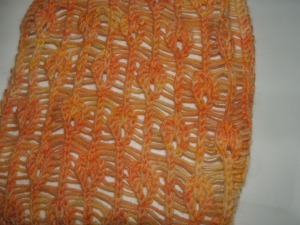 I can’t wait to finish and show you some proper photos.

I used the It’s Not a Drop pattern, paired with Studio June Super Cash Sock yarn in the amazing shade of A Drop of Golden Sun. Lovely!!

This week I have been in a terrific mood. The weather in Michigan has been unbelievable — 50+ degrees! And I have been cranking away at some goals.

1. The jeans. This is off the table, so I have mentally scratched this from my list.

2. The sweaters. I have been making some plans. I am going to copy a “robe” style sweater I bought years ago from Dress Barn, only I am going to turn the belt into a tab button. It looks kinda like this with riveted belt loops:

The belt is cute, and it nips in my waist, but I’m always dragging it between my thighs, and I have to be very careful in the bathroom so the ends don’t end up in the toilet. I usually tuck the ends into the sweater to avoid this, but then I am afraid I will forget to untuck them when I am finished, and then I’ll be walking around in public with my tails tucked into my bosom. It’s ridiculous. I made up a swatch in a maroon colored Rowan Tweed. Details to follow.

3. We bought an exercise bike! It is being delivered and assembled today. I’m pretty stoked about that. I lost 7 pounds in the last 5 weeks, mainly due to working at my physical therapy and not eating loads of Christmas treats and desserts. I’m pretty happy about that. But it links back to #1, and sewing in general. I don’t know what size I’m going to end up at, so I don’t want to spend a lot of time and money on projects that I can’t wear for longer than 3 months.

So, henceforth we are not going to discuss #1 or 3 above. Here are some new thoughts: 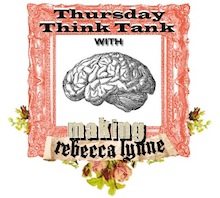